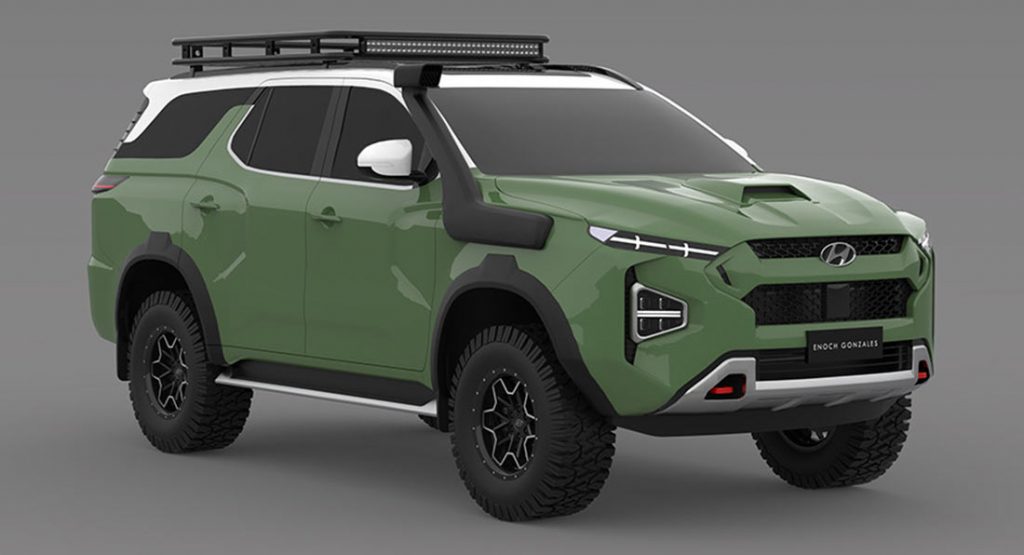 Hot on the heels of reports that Hyundai could launch a ladder-frame SUV, a designer has imagined what such a vehicle could look like.

While Hyundai also builds a large SUV in the form of the Palisade, it uses a unibody construction and doesn’t have the off-road credentials like ladder-frame rivals including the Chevrolet Tahoe and Toyota Land Cruiser. That’s where this Hyundai SUV would come in.

Dubbed the Terracan and created by designer Enoch Gabriel Gonzales, the SUV is based on the ladder-frame Hyundai Tarlac pickup the designer created just a few months ago.

Read Also: 2022 Hyundai Tucson Has A Radical Design, Coming To The U.S. Next Year

As no prototypes for a potential Hyundai ladder-frame SUV are running around, it’s impossible to know what it will look like. Nevertheless, Gonzales’ creation does a nice job of bringing together some familiar Hyundai design elements with a more rugged and aggressive design.

At the front, the Terracan has slim headlights and daytime running lights as well as a split grille and a skid plate with two tow hook, plus a shapely hood with an air intake.

The rugged design of the SUV is especially evident at the side where it has off-roading tires and an impressive ride height, but variants with more road-focused tires have also been rendered. At the rear, it has intriguing taillights with ‘+’ shaped graphics and a light bar, as well as a skid plate.

While a Hyundai exec has admitted that such a vehicle would make sense for the automaker’s lineup, it currently has no ladder-frame chassis to use and would have to develop one from scratch – and even if it gets the green light, we doubt that it would look anything like this illustration.

Note: This rendering is the work of Enoch Gabriel Gonzales and is not related to or endorsed by Hyundai