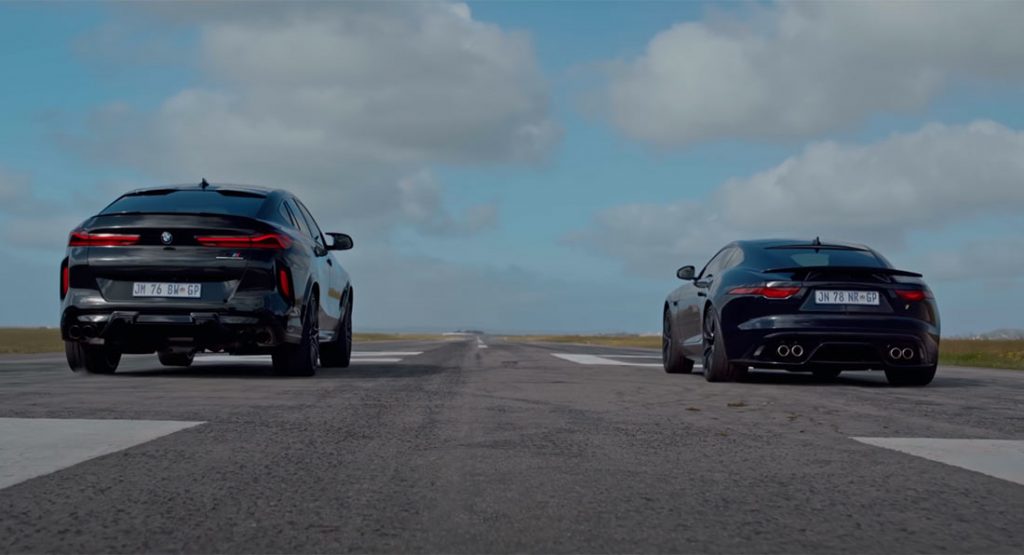 The BMW X6 M Competition and Jaguar F-Type R AWD are not, by any stretch of the imagination, rivals, and and if you were to see the two on the street, it would be reasonable to assume the Jag would leave the BMW for dead in a drag race. Not so fast.

Eager to see which of these two is the quickest off the line, Cars.co.za from South Africa picked up the keys to a black X6 M Competition and a black F-Type R AWD for a series of three drag races. Despite competing in vastly different segments of the market, these two are unbelievably well-matched.

Powering the X6 M Competition is a 4.4-liter twin-turbocharged V8 producing 617 hp and 553 lb-ft (750 Nm) of torque. This engine is connected to an eight-speed M Steptronic transmission sending power to all four wheels. BMW claims the super SUV can hit 62 mph (100 km/h) in just 3.8 seconds and reach an electronically limited top speed of 155 mph (250 km/h).

In the first of the three drag races, the BMW gets the better launch and is able to maintain a lead down the quarter-mile. In the second, the two are neck and neck, but as the speeds start to increase, the Jaguar slowly pulls ahead and finishes a few feet ahead of the BMW. The third and final race is even closer – but we’ll let you find that out for yourselves.