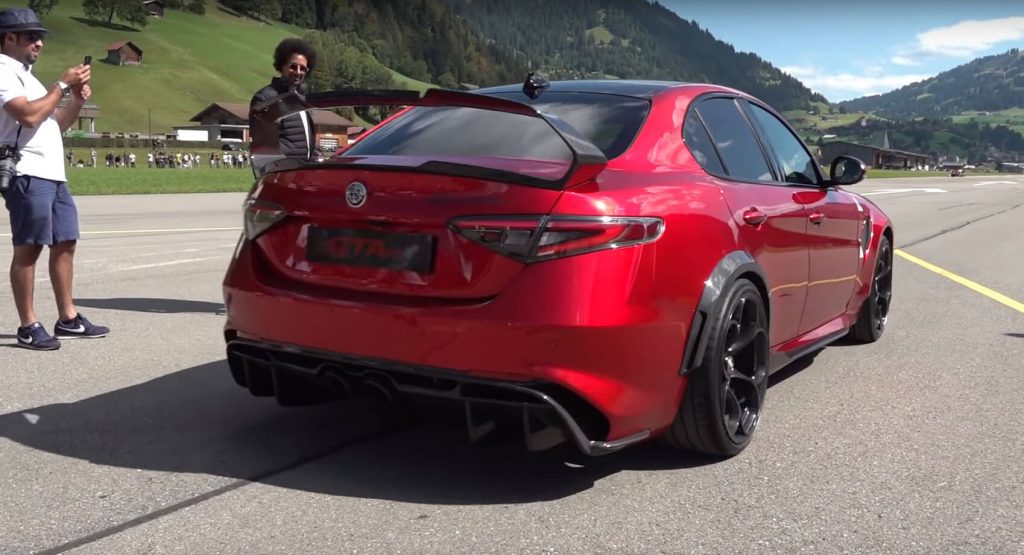 Alfa Romeo recently launched two jaw-dropping versions of the Giulia Quadrifoglio. They’re called the Giulia GTA and Giulia GTAm, and the latter was filmed at the Gstaad Airport in Switzerland earlier this month during an exotic car event.

Present on stage for marketing purposes and to build up the hype for what could very well be one of the best sports sedans in the market, the Giulia GTAm was filmed doing an acceleration run. The second part of the clip shows it between four walls and allows us to take a closer look at some of the details, such as the more aggressive body kit and huge carbon fiber rear wing.

The GTAm sports 2-inch (50-mm) wider front and rear wheel tracks, as well as new shock absorbers and springs that improve handling at high speeds. It also boasts 20-inch center-lock wheels, a first for a four-door Alfa, carbon fiber trim on the outside and a titanium exhaust system from Akrapovic with central pipes integrated into the diffuser.

The special touches continue inside, where there are no door cards, as part of the weight saving measures that have dropped 220 pounds (100 kg) over the Giulia Quadrifoglio. The door handles have been replaced by belts and there is more carbon fiber present. The roll bar and lack of the rear bench, which has room for the fire extinguisher and helmets, are part of the cabin’s highlights.