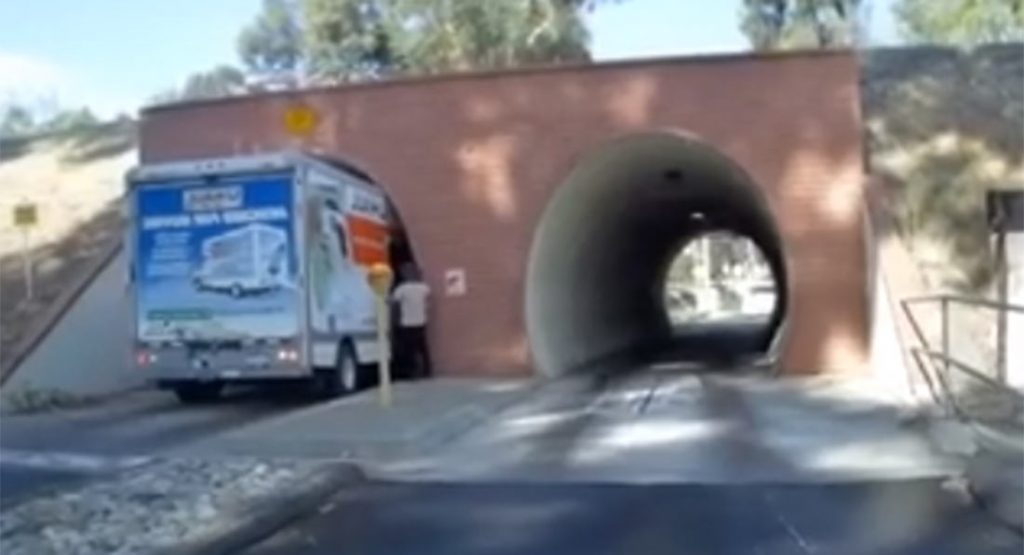 We’ve all heard the expression ‘square peg in a round hole’ and this clip shows what can happen if you try to drive a big square truck into a round tunnel.

This clip was filmed in Lake Forest, California along a section of road that appears to pass under a railway line. Ordinarily, you’d expect to find a simple bridge allowing vehicles to pass through, but instead, there are two separate tunnels.

Watch Also: Trucker Killed In Alabama After Been Forced Over The Edge Of A Highway

The Reddit video shows that the driver of a U-Haul truck attempted to drive through the tunnel, but due to the shape and size of the truck, it simply couldn’t fit. It remains to be seen what happened next but we presume the driver probably reversed out after realizing their mistake.

Interestingly, the video reveals that there is a low-hanging yellow barrier just before the tunnel to notify motorists whether they should or shouldn’t try to get through. We presume that the top of the truck hit this barrier, which should have been enough to warn the driver not to proceed any further. They either didn’t take notice of this or thought that it was going to be a tight squeeze.

Square peg in a round hole from r/Dashcam